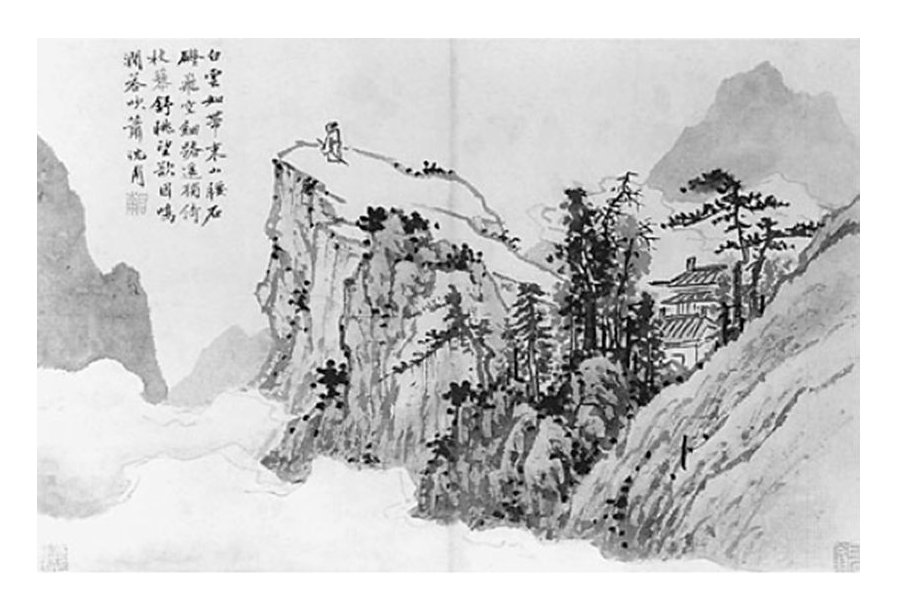 Ho was sitting in the Ascended Masters Club at his preferred bench. He reflected about his last incarnation on Earth, how he was chosen by the “Sage from the Mountains” as an apprentice when he was just five years old, and about letting go. Ho knew his last life was blessed. Even though he grew up without his parents or other kids, he had a joyful life. His Master, the Sage, taught him everything he knew himself without using explanations, and Ho learned naturally and without any effort.

Time was of no real relevance for him and his Master – that he learend from his very first lesson when the master told him to sit next to a boulder near their hut. Just sitting there and feeling the stone, its solidness, and its own rhythm of life that is so different from the human experience. Ho sat there for weeks and weeks – and he loved it. He loved to become the stone, to meld with it, to meld with the ground, to become Earth itself.

Over the years, the Sage taught Ho everything about the elements of nature and of nature itself. One day, when Ho became one with the element air, he suddenly found himself walking through the sky, way above the mountains. Somehow it felt totally natural to him, but at the same time it was a great joy after so many years of being bound to the ground.

As he walked through the air, his master suddenly appeared next to him, smiling. “In retrospect,” Ho mused, “this was the turning point of my life. That day, when I mastered the air, my Master and I knew that I have become immortal, just as my Master was.”

Ho remembered very well what the Master has told him after this experience. It was the only time that he had used words to explain something. The Master knew that what he had to say was beyond Ho’s imagination, so words were required in order to convey his message at least on a mental level.

“Ho,” the Master has said, “listen carefully! My time has come. I have experienced nature and have enjoyed it. But now it is enough for me, and I will move on.” The master paused a while so Ho could realize the impact of his words. Then he continued, “My own Master gave me this most important teaching when I realized immortality. And now that you became immortal, it is my duty to pass it on to you. Listen, Ho! Immortality will become the most brutal prison. It may even lead you to use your insights into nature against other humans. It will turn against you, unless you know how to let go of nature itself!”

Ho was puzzled. What did the Master mean? Going beyond nature? Wasn’t nature everything? Wasn’t  he himself, just as all of the environment, pure nature?

The Master continued, “Nature, dear Ho, is also just an experience. If you want to attain total freedom, you have to go beyond it. You have to let go of nature! When you hear the call from within, do not postpone! That call is both an invitation and a warning. A warning telling you that staying longer could bring much harm to you and your fellow humans. Sooner or later, you will get bored even with nature. But having mastered the elements of nature while at the same time being bound to them will lead to disaster.”

Ho was in some state of shock. He could not imagine that something like that could happen to him. Why would he want to use the elements against other humans? But the Master was very serious, so Ho tried to memorize everything he said as good as possible.

“Going beyond nature,” the Master continued, “is both the most simple and the most difficult thing you could ever do. When you take that route, then there will be no way back. You will never experience nature again as you do right now. When your time has come, do the following. Sit down and fall into yourself. Let go of everything. Fall and fall. Whatever may happen to you, whatever you may experience, let it go. Just continue to fall into yourself. It is the simplest thing, because there is nothing you have to do. It is the most difficult thing, because you will desperately try to hold on to something, as if you were drowning. Anyway, continue falling. Then, suddenly, you will drop out of nature. You will be at a place, which is no place at all. In that very moment, you know you have set yourself free.”

Ho leaned back on the bench and took a sip from his beer. “No place. That was way beyond what I could imagine back then.” He shook his head. Yes, he had a joyful life, but that final letting go did not come easy to him. When he started noticing that his experiences within nature became repetitive, he remembered the words of the Sage of the Mountains. They began making sense to him, yet, it seemed that he had so much love for nature that “falling through it” simply did not happen, no matter how often he tried. When he noticed that the repetitions and cycles drove him into a state of boredom and even cynicism, he increased his efforts. “Oh that trying and efforting. My Master should have said a bit more about these topics.”

But then, Ho remembered, one day it did happen. Initially, Ho wasn’t really sure why, but he suspected that he got some help. Later he came to understand that another aspect of his true self came to enlightenment at the same moment, albeit in another space-time reality. That other aspect and Ho himself have somehow created a synergy that made enlightenment easier for both of them. “Human life is a crazy bastard, isn’t it?” he said to himself.

“That is not the appropriate way to greet a friend.” Althar changed his shape so that his crystalline dragon body fitted on the bench. He grinned at Ho.

“How do you make it that some creature as large as you can come so close without making any noises? I didn’t hear you coming.”

“Well, I mastered nature, you see? So noise is at my disposal.”

“Fall? No. I tend to fly, or to soar. See my beautiful wings? It’s a matter of style. Falling is only for those who have difficulties with the element of air. But why do you ask?”

“Just a rhetorical question.” Ho took another sip from his beer. “So how is your literary adventure progressing? You wanted to do the undoable, right? Writing about the Third Round of Creation.”

“Yes. But I have chosen a different name for it. I call it ‘Utopia’ which literally means ‘the no-place’. I love the term – it is just not possible to imagine the no-place.”

“Right. That I know for sure.” Ho felt like being in some time-loop.  “And how did you express the inexpressible?”

“Unfortunately, it is inexpressible how I expressed the inexpressible. But it is available in the book to those who are able to let go of their imagination. Human imagination is so limited and tends to become a boring prison, you know? It only repeats and refines what it has already experienced.”

“Sure. So I described how the fundamental energies, fire and water, meld into fluid light as a result of a true self realizing ascension, and how this totally new energy allows for a totally new creativity. And of course I have woven some of it into the words themselves.”

“Ah, a new try with new energy? Interesting. Do you think it will register this time?”

“Yes, some will get it – as always. Also, I had help from a few friends who shared their stories and experiences with Utopia. Even Shakyamuni followed my invitation!”

“Shakaymuni? But he always refused to speak about anything metaphysical. What has changed his mind?”

“Actually, I don’t know. But I guess it were the contemporary humans. Maybe he felt that the time has come where talking about Utopia is more helpful than harmful; at least for a few of them. Or he just felt the urge to talk once again. He had that trait, right? I mean, forty-five years of lecturing, always a huge audience hanging at his lips.”

“That’s true. Others continue lecturing even after a few hundred years. They disguise it as compassion, but maybe that urge to talk is just some imbalanced feminine aspect of them.”

“Ts, ts. How cynical of you. I guess you had a hard childhood and a mother that never loved you.”

“I guess it is more the realization that not using words is both the most simple and most difficult thing a human or post-human could do. Compared to that, falling through nature is a piece of cake.”

“” Althar said.
“” Ho agreed and both got up from their benches to join the on-going celebration of existence in the Club.

This article appeared originally in the October, 2017 issue of the Shaumbra Magazine.