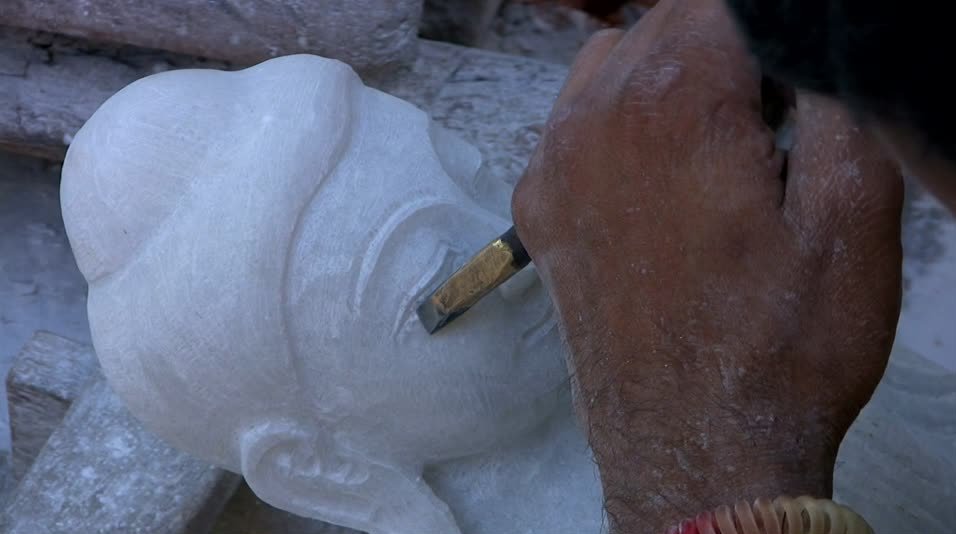 I’m back on my favorite island to put the finishing touches to “Althar Surreal – The Lucid Dreamer.” Well, with only one week left, I will not make it to the final page, but there’s good and steady progress.

It’s always interesting for me to witness how the final version slowly emerges from the original draft. Everything was already present in the first sketches, but making it understandable for others is quite a challenge and sometimes requires harsh measures.

When I thought about this, a snippet of “Groundhog Day” started to play in my mind’s eye. In that scene, Bill Murray was working on an ice sculpture with a chainsaw. That’s a pretty good image for what happens when going through a first draft. It’s like bringing a huge crystal into a shape that speaks not only to yourself, but also to others.

So to get this blog entry started, I googled for an image of Bill alias Phil doing his work. For reasons only Google’s AI is assumed to understand, a completely off-topic image was on top of the search results. It showed an artist chiseling an eye of Buddha.

My first reaction when seeing this image was, “What?! Totally brutal and totally wrong image!” But then I realized that this picture is a much better representation of what I’m doing right now with “The Lucid Dreamer.” And no, I do not credit Google for somehow reading my mind and knowing better what I want than I do. Instead, I tend to believe that my magic powers were at work, you know?

Sure, I’m not sculpting a stone eye of Buddha, but there is still a resemblance. One of Althar’s favorite metaphors is the Eye of Suchness, and finalizing the new book is like polishing the Eye of Suchness so that it stands out on every page. Thus, it’s a kind of sculpting with words. The good thing about using words and a word processor instead of stone and chisel is the Delete key. I don’t even want to start thinking what it would mean to redo the whole work if I made a mistake.

Another advantage of sculpting with words is that you can easily extract a part from your work, and that’s what I will do. In “The Lucid Dreamer,” Althar goes very deep into how the dream of separation gains and maintains the status of being “real” by means of perception in conjunction with specific formations of consciousness. It would require too much context to extract parts of these discussions, so I selected a passage that should be understandable as it is. It comes from a chapter that addresses a very practical question: How do you handle the paradox of apparently living in a physical reality while knowing or at least supposing it’s not what it appears to be?

The chainsaw stage for this chapter is over, the polishing is nearing completion, but the final edit by a native speaker is pending – so good to have a Delete key.

Excerpt from Chapter „The Paradoxical Reality of the Unreal“

[…] Compare that to knowingness. Knowingness is! It needs no interpretation. It has no premise. Knowingness is not perceived and is therefore not personal! It is difficult for a human to even imagine the simplicity of existence as long as he is subject to the constant confusion and distortion of perception.

But however sublime the feeling may be, when you experience knowingness from time to time, knowingness is from a different world. It springs from true reality! It gives you an intuition of what truly is. However, since you are probably not yet in a state of permanent enlightenment, you are always pulled back from knowingness into your human perception.

And then the question arises for you quite practically, to what extent you should admit a certain “reality” to what you recognize as illusion in your bright moments. For example, let’s take the phenomenon of energy.

In your moments of enlightenment, you will probably agree with my explanations regarding the non-existence of energy and matter, and you may even experience it. In addition, the most peculiar things may happen in your everyday life that cannot be explained by probabilities or normal physics. The „energies” then seem to simply work out and synchronicities appear to be the new normal.

You may find yourself wanting to believe that you have become a New Magi. But unfortunately, things don’t always work out the way you want them to, right? You can’t walk on water most of the time and on bad days you can’t even find a parking spot. And since you still have a slight doubt about having let go of the belief in gravity, you won’t jump off a cliff.

In short, although you have the knowingness that energy and matter have only a pseudo-reality at best, they are „real enough” so that you should not ignore their effects on your existence in the dream of physical existence!

Thus, your entire beingness during the transition phase into embodied ascension can be called a living paradox. In fact, you will remain a living paradox even afterwards, but with one difference. In a way, it can be said that currently you are predominantly on the shady side of the paradox. You are still in separation, but you know about true reality.

I, on the other hand, Althar, am on the sunny side of the paradox – to stay in the picture. I come from beyond separation and only make myself noticeable within separation.

You have to take care of your body of matter even though you know that it does not really exist. On top of that, you have to feed it all kinds of energies that ultimately don’t exist either. After all, knowingness does not saturate you yet. I, however, don’t eat at all, enjoy a perfect figure, and indulge in pleasures of all kinds without lifting a finger or wing.

That’s the way it is, during the transition phase into embodied ascension.

As you know, you are always drawn back to the shady side of this paradox for a variety of reasons. For example, I remind you of hypnosis, feelings of guilt and shame, fear of extinction, and the resistance of your biology down to the cellular level. I also guess that there is still a part of you that absolutely wants to unite separation and true reality! You know, putting samsara and nirvana on two sides of the same coin or something like that.

And then there’s something else:

There is still a part of you that wants to smuggle a separation-based identity into the Third Round of Creation!

But this is a sheer impossibility. The reason for this is very simple:

The unreal has just no place in the real! It cannot maintain its illusory existence there!

In fact, you will not be able to take even the smallest fragment from separation into the Third Round of Creation. Not one! No way! There is no exception, not even for you! It is simply impossible! The sooner you come to terms with it, the sooner you will leave the shady side of the paradox once and for all.
[…]

And just for the sake of completion, here is Bill Murray at work:

3 Replies to “Sculpting the Eye of Suchness”