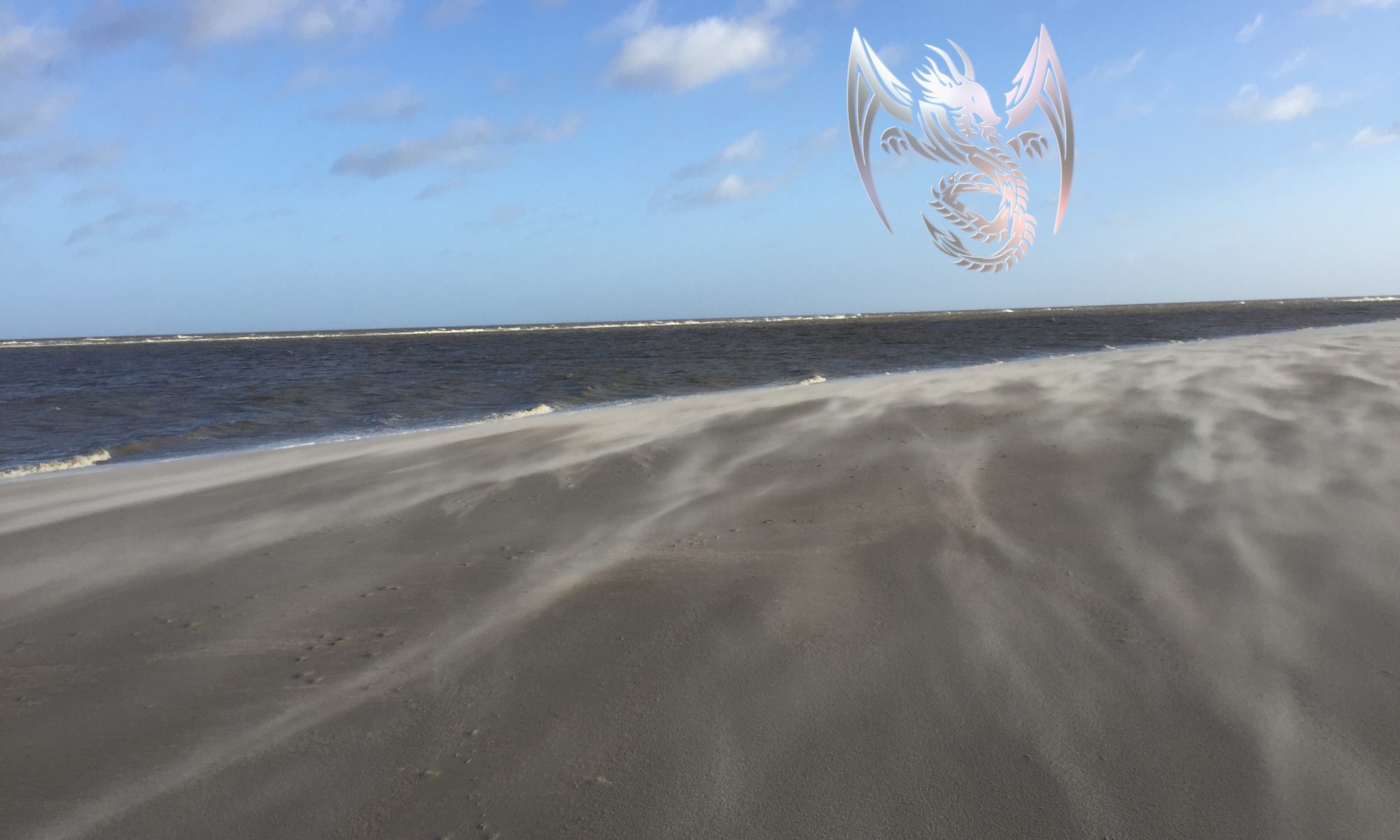 Back at the North Sea, on a small island that served as the birthplace for some of my books. It was “The Free Human” which was the first to find its way into 3d here. That was only a few years ago, but it feels like eons have passed since then. Just one year later, at the same provisional desk, “Althar – The Crystal Dragon” stomped into my life. And so it continued with the following books and this island. Except for the second volume, all others were either completely created here or they got their final polish in the rough winds and the constantly changing weather of the north.

I love being here in winter. Mostly everything is closed down. Very few tourists. No cars, as always. Apparently more dogs than humans. Since there is simply nothing but water between the shore and the North Pole, mass consciousness is pleasantly thin. And then there is this lady who takes a bath every day. Kind of inspiring not to hold back, but I’m fine with taking off my shoes and letting the cold water splash around my feet. For a few seconds. No need to exaggerate.

The Sixth Volume, or the first of a new series – this has not yet been decided – is relentlessly crystallizing into words. Most of the content has already become clear in the last weeks and some fragments I had already scripted prior to coming here, but I had chosen to do the “real thing” on the island. Again and again I am surprised about the clarity and even relief that comes with finding a good verbal expression of deep truths. It’s not about the details, but the broad strokes that help to find a better and even simpler understanding of this unfathomable thing called “consciousness experiencing separation.”

So what will the next volume be about? The only thing I can reveal so far is that we will explore in detail what it means that “You are your own universe.” We will quite literally examine the stuff that dreams are made of and why the heck different entities can experience the same environment while each of them is still their own universe.

The reason why we address this topic is that it will be of tremendous help to become more and more detached from physical reality by seeing what it really is. Thus, the new book is directed to those who are in the transition phase; to those having glimpses of enlightenment and true reality every now and then, but then are pulled back into human mode.

The energy coming through Althar and flowing into the words is huge, and it actually surprises me how strongly it still touches me. It seems that by providing an  additional layer of details, the already existing “Aha” gains so much more depth and clarity that the limited human consciousness tends to give up for ever longer periods of time. Just as my laptop did yesterday, when I was in the midst of writing an exciting chapter. The laptop just shut down. Just like that. No power issue, no warning, no blue screen.

I know I need to be careful with my equipment when I’m highly charged, and I swear I was absolutely balanced when the laptop gave up. Thus, either the laptop did not like what I was typing or it took it to heart and deconstructed itself. Anyway, it felt like looking into a mirror and suddenly you do not see yourself but black nothingness. Thankfully I’m used to press Ctrl-S at least every tenth key stroke, so nothing was lost. Today I noticed that my age old calendar, which is my buddy since the days of ancient Palm Pilot, got corrupted by the crash. Twenty years of  notes and events wiped out? Just like that? My precious history and oh-so-glorious memories gone? Good that I have a backup at home – and can pull myself back into human mode. So the whole incident was very symbolic for what happens in the transition phase.

I know from experience that the writings can change direction at any moment, even making already existing chapters obsolete. Therefore, I will say no more. Instead, I will have a walk on the cold and windy beach prior to continue writing. And no, I do not plan to take a bath. Things are intense enough as they are.

5 Replies to “Notes From The Island”