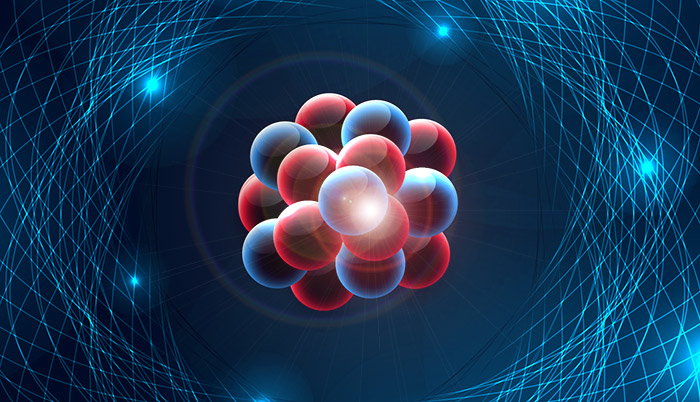 In the final session, Aouwa, the true self of Althar and Joachim, leads the attendees into the nucleus of a cell and lets them choose a single atom of one of the DNA strands residing there. Aouwa then initiates the release of the consciousness that is bound at this level. The following is an excerpt of that session.

Now, come to a halt and choose a single atom of your DNA strand. Visualize it as a sphere, a cloud of electrons swirling around it. You even go deeper towards the core of this atom. Here you can visualize the neutrons and protons as small spheres clinging together with enormous, enormous intensity.

You might say there is a thin layer around these particles consisting of your consciousness. It clings to those particles with the same forth as those particles cling to each other. That is the result of the hypnosis. You were hypnotized into wanting to cling, to attach, to bond on this level, and so you did, because hypnosis is powerful, as you know.

You do not want to rip this sleeping part of you out of its sleep. Why would you? If there is a child sleeping in its crib and it’s time for waking up, you do not go there and shake it brutally. You do it gently, for it might have a dream, and there is no need to scare anybody or anything that is dreaming.

So, instead of shaking this consciousness and yelling, “Wake up!” you just send your signature towards these particles and your consciousness that is bound to them. You might join your own internal humming of your signature, a multidimensional humming, with the music that is playing. Just add your humming to the music and feel into that. Gently, gently, gently waking up the consciousness that is bound to a single atom. This is how embodied ascension will start – with a single atom. Never think an atom is small or insignificant.

You might feel how that hypnotized consciousness is slowly coming in resonance with you. Gently. In a way, it is waking up from its sleep, it’s rubbing its eyes, it doesn’t really know what has happened. “When did I fall asleep? A moment ago? Eons ago?” Oh, it doesn’t know. It’s dizzy, but it recognizes itself, its own signature, which is you, being here in awareness. Like a loving mother holding her child. The child recognizes the mother as its mother. So, it knows it’s safe and then the magic will unfold.

The magic is that the consciousness that has bound you for so long to the physical now becomes the link between what you call the light body and the physical body. Actually, that is the way how the light body becomes partly light and partly matter. That is the way allowing you to retain your physical body on Earth, to interact with others showing them a human image and a fully functional body. No need to come in as an ethereal being without a physical form. No, you’ll be fully present in the physical, yet you know that you come from beyond the dream – and it starts with a single atom.

The audio recordings of the whole workshop are available here.

2 Replies to “It Starts With A Single Atom”