WizzJ is a cutting-edge music visualizer for high-end iOS devices and Windows. It fully exploits the latest advances in graphic processors to create a flow of animated generative art. The animations are synced with the beat and texture of the music being played from your music library. If no music is playing, WizzJ can capture input from the microphone.

WizzJ represents a new generation in the art of music visualization!
It offers a total of 30 various styles, , each providing a unique and immersive experience:

Download WizzJ for free and enjoy a fully functional preview of all available styles. Then buy the style bundles you like best.

WizzJ can support the device’s native display resolution for a detailed and crystal clear presentation. Activate this feature in the Settings App if you have a powerful device.

You can easily create your own music videos by capturing WizzJ’s animations with QuickTime and your Mac.

See below for videos created by users. 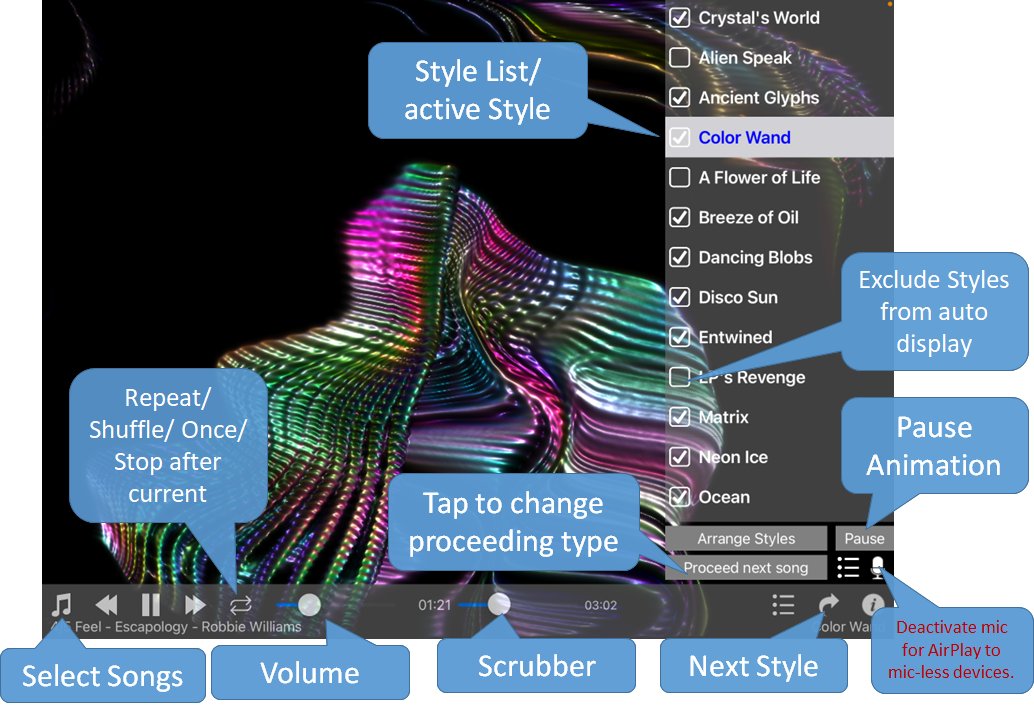 Support for the high resolution display can be disabled via the iOS Settings application. This results in a faster evolution of the graphics.

The scrubber and/or volume controls might be hidden, depending on the device’s screen size.

If you bought music from iTunes before 2009 the songs might still be DRM protected and thus are not allowed to be played outside the iPod. Meanwhile Apple has dropped this restriction, but the songs need to be re-downloaded. See here for a description.

Using AirPlay:
WizzJ supports AirPlay. However, as WizzJ captures sound form the microphone if no song is playing, AirPlay will not show any devices that do not have a microphone. Therefore, deactivate input from the microphone by tapping the “Microphone” symbol at the bottom of the style list, open the iOS ControlCenter and select your AirPlay device.

WizzJ for Windows allows you to hook on to your favorite music player, e.g., Windows Media Player, iTunes, VLC, etc.
From the menu, choose Settings|Select Sound Source, and choose the same source as your player is using. WizzJ will intercept the played music and use it for the visualizations.
WizzJ for Windows comes with the 30 different styles.
Use the Style Manger via Styles/Style Manager to arrange the styles in your favorite sequence and to activate/deactivate styles.